Congratulations and thanks to the cast, crew, orchestra, Julian Clary and EVERYONE involved for such an amazing show.

We’ve had our first review! LondonTheatre1 gave the show 5 stars, saying it was “one of the best evenings I have spent in a theatre for a long time” – READ REVIEW

Most importantly, we raised loads of money for The Lewy Body Society. You can still make a donation here.

We’re excited to reveal the full cast of Showtime Challenge 48-Hour Musicals production of Singin’ In The Rain at the Adelphi Theatre on Sunday 13 Oct 2019.

And don’t forget the show will be hosted by the one and only Julian Clary, all in aid of The Lewy Body Society. Sponsored by ABRSM.

Showtime Challenge 48-Hour Musicals is BACK with Singin’ in the Rain at the Adelphi Theatre.
It’s on Sunday 13 October, in aid of the charity, Lewy Body Society.

Rehearsals for Singin’ in the Rain will begin in the evening of Friday 11 October. Then, after 48 intense, exhausting hours, the curtain will rise at the Adelphi Theatre at 7pm on Sunday 13 October. Ready or not, the show WILL go on!

Audition booking is now open to recruit a sensational cast made up of West End professionals and super-talented amateurs. They’ll be joined by a 30-piece orchestra, production team and a celebrity host. Everyone involved with the fully-staged, costumed & choreographed show gives up their time for free. All in support of this year’s chosen charity, The Lewy Body Society

“‘Singin’ in the Rain’ is such a classic Broadway musical with great songs and amazing iconic dance routines. I can’t wait to be blown away by 100 people all singing and  tapping on stage together after such a short amount of rehearsal time.” Esther Biddle, Director

“We’re thrilled to provide this opportunity for new talent to work alongside experienced West End stars, and to raise awareness and funds for a such a good cause.” Ian Haig, Producer

“My beloved grandmother suffered with Lewy Body and sadly died from it last year, so it is an honour to be performing ‘Singin’ in the Rain’ in her memory and to help alleviate the distress of future sufferers.’ Leigh Thompson, Musical Director

The Lewy Body Society was the first charity in Europe exclusively concerned with Lewy body dementia. Its mission is to fund clinical research to improve the diagnosis and treatment of the disease. It also raises awareness of Lewy body dementia among the general public and those in the medical profession and decision making positions. And it provides information resources for patients & carers. www.lewybody.org

“We’re delighted to be the charity partner for this year’s 48-hour musical. It is a huge opportunity to raise awareness of Lewy body dementia and raise much-needed funds for research into the disease.  We can’t wait to work with the fantastic Showtime Challenge team on what we’re sure will be a weekend to remember for everyone involved.”  Jacqueline Cannon, CEO, The Lewy Body Society

Auditions will take place on Saturday 1 and Sunday 2 June. To find out more, view our Auditions page.

And don’t forget to Buy Tickets!

Amazing! Amazing! Amazing! THANKS A MILLIE-ON to the cast, orchestra, host, crew, production team, theatre staff, audience, and EVERYONE who helped make last night so magical. It was all in aid of Mind, so feel free to show your appreciation on our fundraising page.

More info, photos and reviews soon – once we’ve got our breath back!

Yes, the 48-hour countdown has begun. The cast are busily rehearsing in preparation for the big night at the Adelphi Theatre. At the time of posting, a handful of tickets are still available. Click here to see if there are any left!

Thanks to all our Indiegogo supporters!

Thanks to the following people who generously backed our crowdfunding campaign on Indiegogo.

You really helped us get this show on the road!

Meet the team who make everything happen behind the scenes! This army of dedicated volunteers do all the things you don’t even think about when watching a West End show. Directors, musicians, choreographers, hair, makeup, props, costume, sound, lights, front-of-house, sets, stage-management, photography, marketing, etc, etc. This is a BIG production, and we’ve got a BIG team who will be working hard to make the magic happen. A great big THANK YOU to every single one of them!

We’re THRILLED to announce that actor & presenter Warwick Davis will be hosting our production of Thoroughly Modern Millie!

“I’m really excited to be involved with #48HourMillie. It’s going to be such a great night.
I can’t wait to meet the fantastically brave & reckless cast and everyone involved in the show.
I have huge respect for Mind and the excellent work they do, so it’s a real honour to support them in this project.”
Warwick Davis

Warwick is an actor, television presenter, writer, director & producer. He played the title characters in Willow and the Leprechaun film series, the Ewok Wicket in Star Wars Episode VI: Return of the Jedi and Professor Filius Flitwick and Griphook in the Harry Potter films. Davis also starred as a fictionalised version of himself in the sitcom Life’s Too Short, written & directed by Ricky Gervais & Stephen Merchant.

Warwick joins an already-fabulous cast of talented actors, dancers and singers appearing in the show itself including the sensational Anna-Jane Casey as Muzzy.

Showtime Challenge 48‐Hour Musicals is delighted to announce the full cast of its production of Thoroughly Modern Millie coming to the Adelphi Theatre on 20 March 2016 for one night only! It includes West End favourites, Anna‐Jane Casey, Suanne Braun and Will Kenning along with talented new stars Amy Perry, Robert Colvin, Carly Thoms and over 100 more sensational actors, singers and dancers. This all‐singing, all‐dancing production featuring full cast, choreography and orchestra, produced in just 48 hours promises to be the West End’s most exciting night of the year. The show is in aid of Mind, the mental health charity. Everyone involved in the show, including the entire cast, is giving up their time for free to support the cause. Tickets are available here.

They will be joined on stage by Amy Perry as Millie, Robert Colvin as Jimmy, Carly Thoms as Miss Dorothy, Suanne Braun as Mrs Meers, Will Kenning as Trevor Graydon, Joanna Reyes as Miss Flannery, Cletus Chan as Ching Ho, Andy Yau as Bun Foo and West End star Anna-Jane Casey as Muzzy . . . and many, many more! 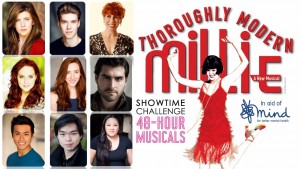