We’re thrilled to announce that the role of Millie Dillmount will be performed by the wonderfully-talented Amy Perry.

“I’m so excited to be a part of this year’s Showtime Challenge! Thoroughly Modern Millie is a show I adore and I’m thrilled to be doing it in aid of such a great cause! As the countdown continues I get more excited (and maybe slightly nervous…!) I can only imagine what an incredible whirlwind the weekend is going to be and can’t wait!” Amy Perry

“Showtime Challenge is very special as it lets us bring such wonderful talent as Amy Perry in a leading role to the West End stage. What a thrill it will be to see Amy shine in what is an amazing role, and one so perfect for such a beautiful and natural singer & actress. She is simply wonderful and we are all so excited to be able to produce the show knowing we have such a brilliant Millie on board.” Ian Haig, Producer

Amy Perry graduated from Arts Educational Schools London in 2015. Credits while training include Brenda Strong in Catch Me If You Can, Mitzi in Crazy for You and Charlotte McAdam in the world premiere of Defect. She has performed in the choir for the Olivier Awards, the ensemble of Follies in Concert and Amy has been a soloist on BBC Radio 2’s Friday Night Is Music Night. Professionally, Amy has played Ursula March in Sweet Charity, Cadogan Hall, and spent Christmas playing Snow White and taking the role of Assistant Choreographer in pantomime at the Compass Theatre, Ickenham. Follow Amy on Twitter.

Amy will be joined on stage by West End star Anna-Jane Casey who will perform the role of Muzzy. 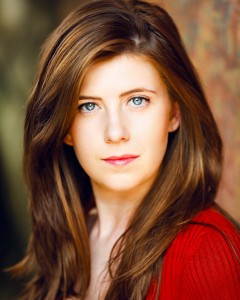